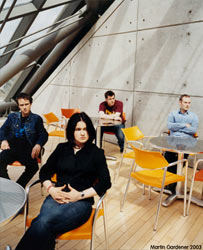 One of the best bands from Scotland, The Delgados, have been together for over ten years now. Their five albums are some of the most interesting music to come from Scotland in recent times. Most of the band met in college. They are Stewart Henderson (bass guitar), Emma Pollack (vocals/guitar), Paul Savage (drums), and Alun Woodward (vocals/guitar). They are dedicated songwriters. Their songs feature a mix of female and male vocals. In 1996, they started their own record label, Chemikal Underground, thus having a hand in the Scottish Underground music scene, and discovering bands like Bis, Arab Strap, Mogwai, and Sluts of Trust.
The Delgados’ first album Domestiques (1996) immediately caught the attention of the late John Peel. He soon introduced The Delgados to the world by featuring their music regularly on his radio show. The band toured with Elastica and The Wedding Present, who were at the height of their popularity at the time. They soon worked on their second album, Peloton (1998). They even played a show at John Peel’s house for his 50th birthday party. Still they were a very underground band.