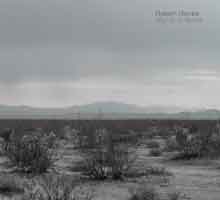 In a country overrun with laptop dub wizards and art gallery DJs, Robert Henke
is perhaps one of Germany’s more interesting thump-funkers. As Monolake, Henke
creates spatial sound environments you can dance to that succeed at inducing
physical motivation as well as mental stimulation — to the satisfaction of
fashionable booty-shakers and digital glitch fanatics everywhere.

Henke’s latest effort, "Signal to Noise," (pictured above) however,
finds the Berliner expanding his palette beyond the caverns of warehouse club
culture and outside the realm of the headphone mindset.

Technically speaking, these three epic-length tracks are experiments in FM
synthesis. In applying a meditative approach — a quality often underlying much
of his dance music — Henke patiently explores the mutative effects of slowly
shifting timbres. The resultant harmonic drones create new, virtual environments
that have a strange semblance to natural surroundings. In the liner notes, Henke
characterizes this effect as only a partial coincidence and one that spurred
him to willfully force such similarities by remembering certain places he’s
been to before.

While it’s interesting how "Studies for Thunder" recalls certain
rainy days I’ve lived through, the experience of listening to Henke’s virtual
re-creation does little to stimulate the ears, and puts one in a mood that’s
surprisingly unmemorable. The title track — divided into two parts — seemingly
aims for mood enhancement, but its constantly shifting overtones create more
of a trance-like state than anything else, and the processing Henke applies
to his tapestry of timbres are disappointingly static.

If "Signal to Noise" could be presented in and listened back to in
multi-speaker surround sound, it might make for a more impressive listen. In
the meantime, let’s hope Robert Henke gets his groove back.

Even grindcore thrash-rockers go through an
experimental phase, or so it seems with the new split
CD by Southern California’s Fast Forward and T Cells.
Both acts, which apparently have links to various
hipster hardcore groups, reveal an innate tendency to
spazz when confronted with electronic gadgets and drum
machines, but one is more experimental than the other.

Rewind in time to about 1982 and you’ll be in sync
with the sound of Fast Forward – a band of darkwave
derelicts whose take on industrial dance music is
slightly annoying, ironically low brow, and resolutely
lo-fi. Fast Forward’s stark synth anthems swing like
an old Soft Cell or Silicon Teens record, but favor
proletariat sloganeering and existential angst over
glamour and gloss.

It’s hard to tell exactly what lies beneath the veneer
here, but the group seems to be grappling with a
convergence of issues revolving around racial identity
and dissident thought. It’s not clear why they title
their five contributions ‘Live In Afrika’, but when
they chant "white pride/black power/everybody gets
shoved in the shower" on the track "Race Relations,"
Fast Forward seem to be expressing frustration with a
world ensnared by growing cross-cultural currents of
apartheid.

T Cells on the other hand, come across as purposefully
nonsensical and seem to have little use for context or
cryptic imagery, much less standard modes of song
composition. Thus, T Cells excel where Fast Forward
does not, and that’s in the gadget-fuckery department.

The first two tracks, "Deformed" and "Finger in the
Socket," have electronic rhythms that any two-legged
troglodyte with or without opposing thumbs could have
come up with. However, their quirky employment of
buzzing techno tones, cheesy snyths, and white-noise
blasts combine to create a spastic frenzy of
surrealist fun. Making the esoteric nature of this
split release complete, T Cells throw down an
impressive electro cover version of Crime’s
"Maserati."

Fat Day’s new full-length "Unf! Unf!" is a collection
of quick, vigorous zaps of rock and roll shock
treatment sandwiched between moments of
quasi-religious techno-hymns. Hailing from Cambridge,
MA, Arik, Doug, Matt, and Zak pay little respect to
the guitar Gods and instead worship
mathematically-complex arrangements of bass and drums,
only to top it all off with adolescent ranting and
cheap-sounding synthesizers.

Locked and loaded, Fat Day literally explode from
track to track. So much so that what they have to say
has to be delivered in an abbreviated, Ginsburg-esque
stutter: "Good things cheap! Toasters! It’s a treat!
Waaaah! It’s not garbage. Nordic tracks! TM! Break our
backs! Waaaaah!"

Fortunately, their hyper-spastic breakdowns are offset
by the occasional stained glass synth movement,
sinfully misleading the listener into a Zen of
iniquity.

Blink and you’ll miss this 30-minute masterpiece of
youthful indulgence. If you’re caught yawning, then
you’re probably too old or too slow for musical
fireworks such as this.